Addenbrooke’s Hospital, as I am sure many of you know, is named after Dr John Addenbrooke who during the 18th century was one of the first people to leave his personal wealth to fund a voluntary hospital.

We do not know much about John Addenbrooke himself but we do have two letters written by him in the Hospital Archives.

This one is dated 4 August 1716 and he is writing to a colleague giving advice on the treatment of a patient who is thought to be suffering from an internal ulcer.  The treatments he suggested were emetics, purges, bleeding and spa waters!!! 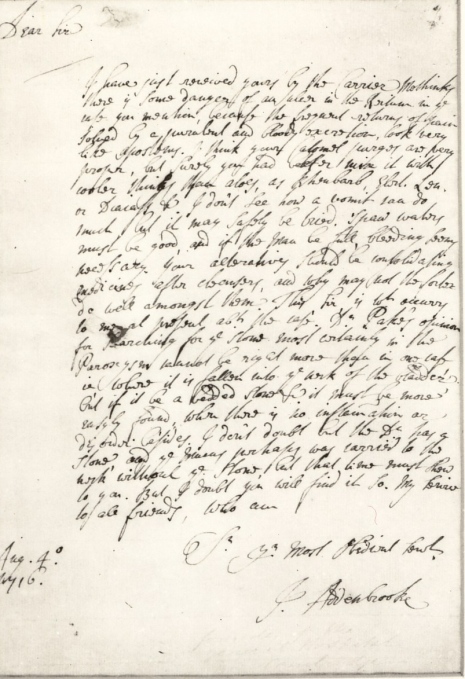 This and a letter dated 1711 are all we have from him, but he gave his collection of specimens, held in a chest which is now located in the Armitage Room at St Catharine’s College.  The chest still contains a wide variety of drugs and medicines of the time. He also donated a number of his classical medical texts to the college library.

Addenbrooke gained admission to Catharine Hall (now St Catharine’s College) on 13 December 1697, and spent a third of his short life of 39 years there, as a Scholar, Fellow, Lecturer and Bursar.

In 1711 Addenbrooke left Cambridge to practise medicine near London, then due to ill health he was forced to retire to Buntingford in Hertfordshire in 1719. He died there on 7 June 1719 and was buried in the chapel of Catharine Hall, where the tomb and its inscription can still be seen.