On the 21 July 1973 Stage 2 was formally opened, although parts of it had been in use since November 1968, at a simple but moving ceremony in the courtyard outside the Accident Unit.

This is the article about the ceremony from The Addenbrooke News of August 1973:

‘Mr Roger Parker, one time Chairman of the Board of Governors and Lord Lieutenant of the County at the time the Queen opened Stage 1 in 1962 was invited to perform the historic ceremony.  In the spirit of the year, he chose to plant trees rather that perform any other symbolic ceremony.  Three 18” Swedish Whitebeams now proudly mark the further step in the development at Hills Road.

At the invitation of Lord Todd, the Chairman, and members of the Board of Governors, over 160 people attended, representing the city, county and university, the Department of Health the Regional Board, the voluntary workers in the hospitals and representative staff from all departments and grades.  All were seated beneath the Accident Centre canopy – just in case it rained.

Mr Parker, accompanied by his wife, paid tribute in his short address to all who had played a part in the planning, building and commissioning of the new hospital.  He wished everyone success in making it one of the finest hospitals in the country.  He was then invited to ‘plant’ the trees and did so with much more expertise and enthusiasm than the organisers expected! 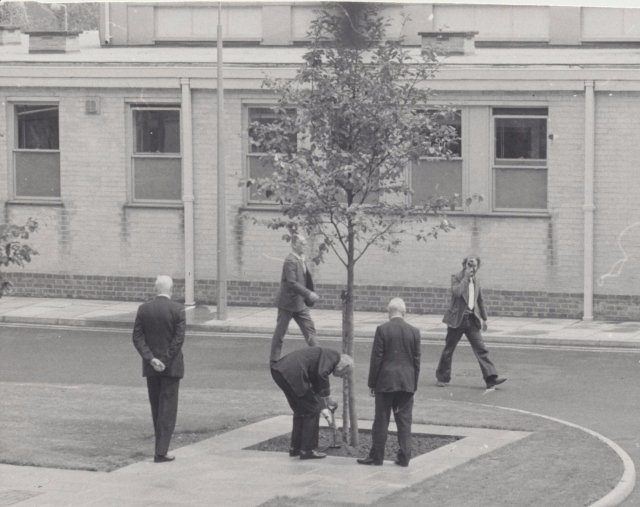 The event was marked by the setting into the courtyard of a 6’ Welsh slate on which is inscribed the words ‘These trees were planted by Mr R H Parker, CBE, MC, MA, to commemorate the official opening of a further stage of the new hospital – 21 July 1973’.