Recently I had a friend who had a member of her family with a head injury and had to make use of the Lewin Rehabilitation Unit.

She wondered why it was called Lewin, I was able to tell her that the Unit is named after, Mr Walpole S Lewin (1915-1980) a consultant neurosurgeon working in Oxford until his appointment in Feb 1955 as Consultant Neurosurgery by The United Cambridge Hospitals and the East Anglian Regional Hospital Board to establish the Neurosurgical Unit for East Anglia, based at Addenbrooke’s.  There was no such unit in the east of the country at this time and it was felt that this unit should be a priority when designing and building the New Addenbrooke’s.  Lewin used his organisation and administrative abilities to design and build the new unit, which was completed earlier than expected.  He was also instrumental in the development of the University Clinical School.

The Neurosurgical Unit was one of the first planned for the ‘New Site’ on Hills Road, and in October 1961 the first patients to be admitted to the ‘new site’ went into the Department of Neurology and Neurosurgery, which are the ‘A’ Wards.  This event was historic for two reasons, firstly these patients were the first treated at the ‘new site’ and secondly the opening of this new service for the East Anglian Region.

The specialist Stroke unit, which formed part of the existing Rehabilitation Unit, was officially opened in Oct 2000 by the TV chef Jamie Oliver. 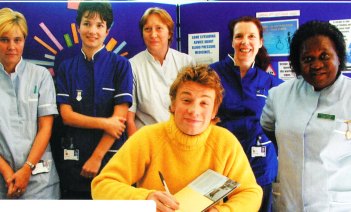