I am sure many of you, while walking the corridors of Addenbrooke’s, have noticed the very long series of water-colour sketches leading to the x-ray department. It has an unusual history.

The Honorary Archivist while still working at the hospital as the Administrator of the Hospital remembers Mr Ernest van Someren coming to see him with a very large rolled up item under his arm.  He said he had this scroll and wanted to donate it to the hospital.  They unrolled the 36 feet long scroll a bit at a time on the floor of his office.  Mr van Someren requested that the scroll should not be broken up and this was agreed.  The hospitals carpenters were then set the task of making a frame for the picture and it was hung on the wall in the summer of 1975, where it still remains today.

In 1893 there was to be a Grand International Exposition in Chicago.  A Japanese organization planned to have a large section consisting of a long quadrangle of buildings facing inwards and an island group of buildings in the middle; all constructed of bamboo or other timber.  They commissioned an artist to design two dozen stalls to illustrate all aspects of Japanese urban life in the 1870’s.  The design was too ambitious and was never used, but the scroll consisting of the set of drawings was bought by an importer of Japanese works of art who had a business in Chicago.  The importer was one of Mr van Someren grandparents, who had inherited it, but never had a house suitable for showing it!! 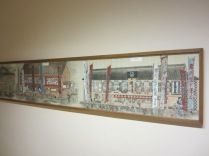