Conrad William Rontgen discovered x-rays in 1895.  Addenbrooke’s Hospital was not one of the pioneers with acquiring an x-ray machine but in early 1896 Mr W H Hayles a member of staff of the Cavendish Laboratory took x-rays of Addenbrooke’s patients and as reported in the Cambridge Chronicle in an article published in 1932, he was most probably the first man in England to take an x-ray!!

It was not until late 1902 that the possibility of obtaining an x-ray machine at Addenbrooke’s was discussed.  Up until then when x-rays were needed for surgical cases they were taken privately and cost the hospital money.  Various groups raised money to purchase in Oct 1903 from the Cambridge Instrument Company an x-ray apparatus for £60 17s 4d. 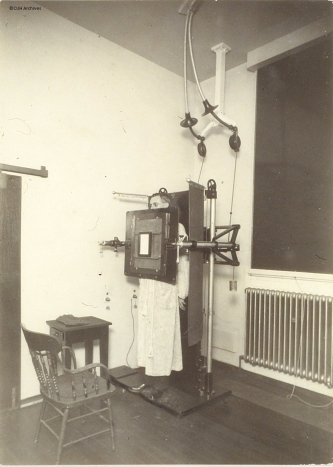 First of all the surgeons were made responsible for taking their own x-rays, which were to be developed by a photographer in the town.  This worked until 1906 when it was decided that the Dispenser, Mr Field should undertake the x-ray work and was to be paid 2s for ‘taking and developing each skiagram’.

I have in the hospital archives 93 volumes of registers of patients who were undergoing X-Rays (Skiagrams) in the Electrical Department and later in the Douty X-Ray Clinic dating from 1910-1962.